Looking for a replacement for VMWare Server 1

I've been looking for a replacement for VMWare Server 1 for a while now. I'm having serious problem with time drifting in VMWare Server 1. I've previously tried VMWare Server 2 but it was really bad (for reasons I now have partially have forgotten). Oh, I remember that one problem was that not all of the virtual machines was compatible with VMWare Server 2. They just didn't start.

Some of my colleagues have tried Sun VirtualBox. I first though that this was a client-only virtual machine software. But after reading the user manual I have found a way to use it like VMWare Server. VirtualBox can be run on a server computer in a headless mode (read: only command line, no grapchics). For example: 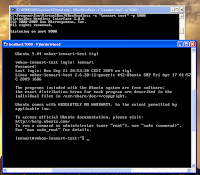 Creating and managing virtual machines can be performed both with a GUI of command line. If you would like use a GUI and have a Linux server I recommend using some X software (for example the one included in  Cygwin).

I have not tried running graphics intense applications yet but my initial guess is that it will be a bit slower then the VMWare equalivance- VMWare Server Console. But I can be wrong...
Posted by Lennart at 21:00