The popular multi player first person shooter game Team Fortress 2 is now free to play on Steam. I took the "bait" and installed Steam just to play this free game (and the game is really fun). So how can Steam money on this? Well there are two things that they can make money from:

1. In-game purchases
Many free 2 play games have an in-game store. In Team Fortress 2 there is a store where you can buy visual appearances (like hats) and also weapons. I was "suckered" in to buy some kind of instrument (called Wrangler) the engineer class in the game can use. For that I spent 0,39€: 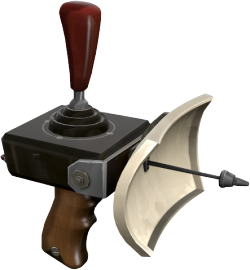 2. Buy other games in Steam
The other thing that they can make money on is other games, that cost money. Since the user already has installed Steam the effort to buy something is lower. And since I could only transfer a minimum of 5 € to my virtual "Steam Wallet" I had some over. So I bought a game call Trine for 1,99€. Once I have bought one game (although cheep) there is a high probably that I will buy more games in the future.
Posted by Lennart at 11:18