How to avoid tearing problems in Windows XP

I bought a new TV because I wanted to watch downloaded movies in HD quality. (My old TV was a 21 inch CRT (fat) TV).

My hardware/software setup is:

I soon saw that I had tearing problems. So what is tearing? It is when the computer sends a new picture to the display while the drawing of the previous picture in not complete. I managed to take a screen shot of the tearing. I used Media Player Classic Homecinema tearing test feature (it is the two red lines). The two vertical red lines should be straight, but they aren't because of tearing. 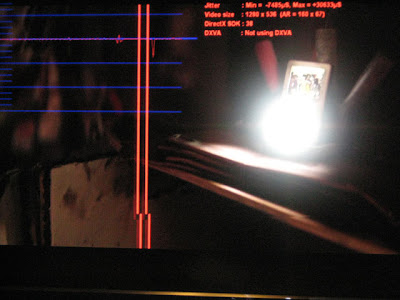 As it turns out there is a bug/problem with Nvidia drivers affecting VMR9 over DVI when not running in "Direct3D fullscreen" (a special mode that all games run in) more info.

This problem is not visible in Vista, only XP. Vista uses this Direct3D fullscreen mode for its desktop, XP does not.

The solution to the problem is to change the renderer in Media Player Classic Homecinema to VMR7 ("System default" was not a option for me because I need subtitle support).

There are some new problems when using VMR7. It is more CPU instence. When I played a 1080p movie my Intel Core 2 Duo E8500 began dropping frames. To solve this problem I installed Core AVC codec. Now fewer frames are dropped and the playback is rather nice.
Posted by Lennart at 21:12